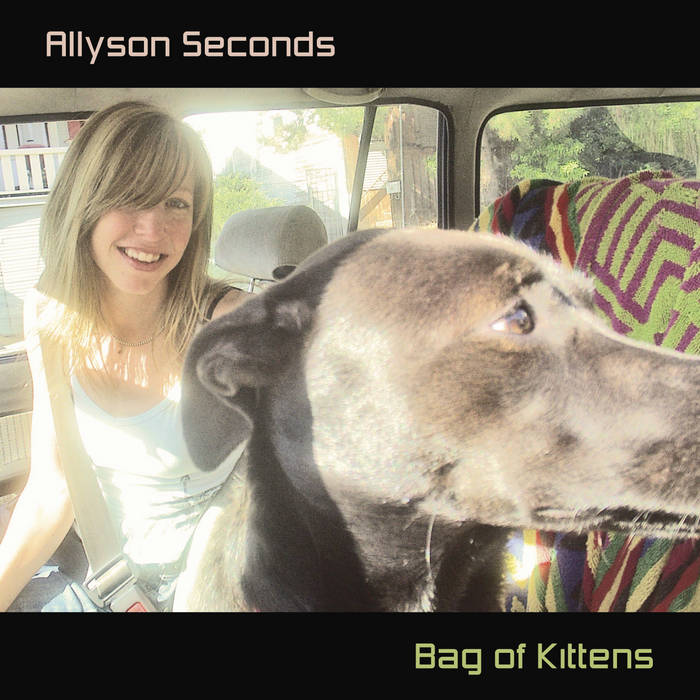 BIG STIR RECORDS is delighted to offer some musical relief from the travails of 2020 by bringing you a much-needed CD and digital reissue of one of the best records 0f 2009: ALLYSON SECONDS' debut album BAG OF KITTENS. Written and produced by the one and only ANTON BARBEAU, this bag reopens November 14 at www.bigstirrecords.com/store and wherever music is sold or streamed. The physical and digital editions come with four bonus downloadable tracks of never-before-heard collaborations between Allyson and Anton.

Sacramento, CA native Allyson Seconds' 2016 release LITTLE WORLD – recorded and written, like Bag Of Kittens, by hometown hero turned globetrotting psychedelic troubadour Barbeau – garnered plenty of national attention. NPR's Ken Tucker summed up the potency of the partnership: “In Allyson Seconds' singing, even when she says the sun isn't shining, you nevertheless feel the warmth of the California sun... The music she makes with her collaborator Anton Barbeau frequently whips up a psychedelic swirl that summons up images of trippy afternoons spent lying in the grass of a park or wiggling toes in the sand by the sea.”

The less-heard but equally engrossing BAG OF KITTENS is more than just the starting point for that collaboration: it shows it in full flower from the start. It's only an accident of distribution that the debut didn't reach the heights of its successor. Seconds, known at the time primarily as a backup singer for the likes of SAL VALENTINO (The Beau Brummels) and husband KEVIN SECONDS (of hardcore legends 7 Seconds and more recently Go National), is in fine and commanding voice right out of the box (or bag, as the case may be), and the songs, arrangements and production provided by Barbeau frame it brilliantly. They possess the man's inimitable quirk and wit, and they're unfussy and empathetic vehicles for Allyson's vocals. Guest shots from luminaries like guitarist Kimberly Rew (The Soft Boys, Katrina & The Waves), Alan Gregg (Mutton Birds), Vince Di Fiore and Gabe Nelson (Cake) and the whole of Oxford band Stornoway also fill Bag Of Kittens with indie pop starpower and texture. (Anton and Allyson's recollections of its recording can be found separately in the reissue's press kit.)

The record is eclectic, but nothing's out of place. Right out of the gate, there's the melodic mantra-like groove of “I Used to Say Your Name”, the soaring “On A Bicycle Built For Bicycle 9”, and the brightly folksy “Boat Called Home”. The sly “Obviously Love” (featuring the classic Ant-line “sign your letters with a grunt”) and the slinky dub of “Put Your Finger On Me” are both ornamented by Rew's fretwork, and the Al-and-Ant duet “If I Could Bring You Trouble” is an instant, lovely and surreal classic. “Dig My Pig” is pure blissful '60s-via-'80s guitar psychedelia. “I'm Just A Country Girl” simultaneously is, and isn't, what it says on the tin, serving up a bit of snark about the pair's mutual hometown, while “On A Sunny Day In Summer” is all harmonies and swirling guitars. “Tie My Laces” – for which listeners can expect a never-before-seen video in honor of this new release – is a beautiful but somewhat sinister idyll riding an electric piano figure into ever stranger territory with Allyson's voice lending a sweetness to the journey.

The giddily bouncy title track and the stately “Wyndeblown” closed the original album. The digital version of the reissue appends four new exclusive tracks by Seconds and Barbeau, with Ant stepping to the fore of the collaboration. The genesis of “It's A Jungle In Here” dates back to the set of songs Barbeau originally crafted for Bag Of Kittens, while “Baby's In Back”, the chiming “Octagon” (recorded elsewhere by Anton with The Bevis Frond) and “Neil Young Song” resonate with the man's current renaissance including his acclaimed 2020 records, the ambitious MANBIRD and Big Stir Records' own release of KENNY VS. THRUST.

With BAG OF KITTENS finally getting its proper day in the sun, it's to be hoped that there's more in store from ALLYSON SECONDS. As for Anton Barbeau, Big Stir Records can only hint that the followup to MANBIRD is just over the horizon in the hopefully better days of 2021.