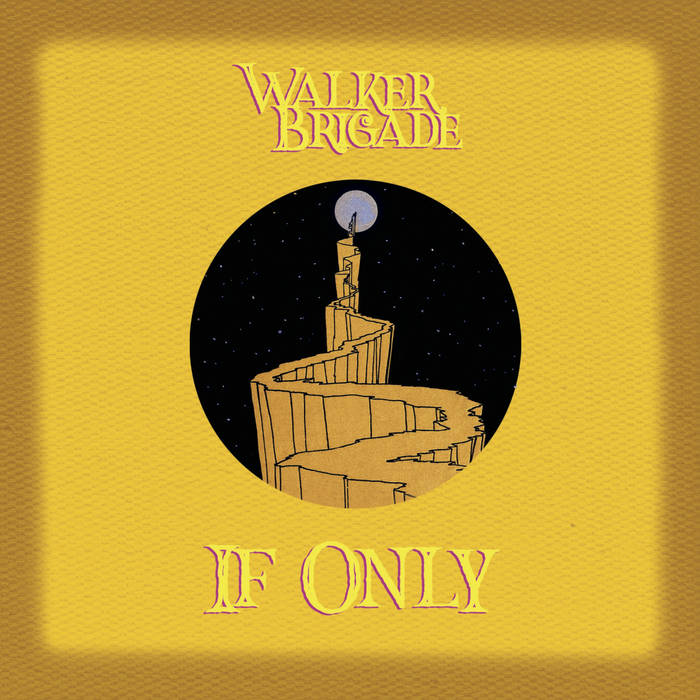 BIG STIR RECORDS proudly announces the long-awaited full-length debut from LA-based neo-postpunk quartet WALKER BRIGADE. The new album IF ONLY, which sees release on CD and Digital on May 27, is up for pre-order at www.bigstirrecords.com and everywhere now, streaming worldwide on the release date. Featuring 13 tracks including the new single/focus track “Choker” and all of the prior singles, notably the combination of “No”, “Fallout” and “Tower” which landed the band on the first ballot for the Grammys, IF ONLY finally gives the world a proper introduction to one of LA's best kept secrets: melodic, abrasive, slyly funny and completely beguiling, WALKER BRIGADE has truly arrived.

WALKER BRIGADE has always been one of the most exciting and enigmatic bands in Big Stir Records' corner of the Los Angeles guitar pop scene. The art-punk-pop four-piece, veterans of a series of live shows and acclaimed singles under the label's auspices, present themselves with a blazing onstage presence, jagged but tuneful hooks, and an arresting male-female vocal frontline (guitarists Tracy Walker and Jeff Charreaux). The drive of the rhythm section – drummer Craig Tyrka, a NY transplant with many a CBGB gig on his resume, and bassist Mark Fletcher whose jazz-punk fusion style recalls Mike Watt – provides the unique bedrock of the band. The full package recalls the energy and ambition of their oft-cited influences – X-Ray Spex, The Soft Boys, Mission of Burma, and inevitably hometown heroes X – with a distinctly modern twist. Walker Brigade have described themselves as “serving up anthemic despair with savoir faire since 2014”, and IF ONLY is an overdue summation of exactly what that means.

The sound is an invigorating throwback to the days circa 1978-1981 when “angular” and “catchy” went hand-in-hand, before New Wave smoothed over the rough edges... inventive, original, cathartic and more than a little mysterious. The band in fact seems to thrive on mystery, if not outright contradiction. Take the fact that IF ONLY sports two covers amongst its spiky-sweet originals: one by Wire (“Sand In My Joints”) and one penned by Mel Brooks (“I'm Tired” as originally performed by Madeline Kahn in Blazing Saddles). There's the bewildering amount of invented and real names by which the members, and indeed the band, have been known since their inception. And there are those Grammy considerations: a resounding mainstream nod for some of the most invigoratingly fractured and bracing music Big Stir has ever issued, leavened by singalong passages like the unforgettable chorus of “Tower”.

In yet another paradox, although those recordings were selected for the “Best Rock Album” category, there was no album... until now. IF ONLY collects those three tracks, previously issued as digital singles by Big Stir, along with most of the now out-of-print debut mini-album THERAPY ANIMAL and new material for the definitive introduction to the band as an artistic force. Taken as a whole, it's a hell of a document. Walker Brigade describe their music as “informed by the isolation created by social media, private mythologies and identities, and the desire to play the timeless music of the post-punk era,” but the music isn't limited to that early heyday. The eerily catchy “Disease” evokes Pixies and The Breeders, “V.D. Doll” rides a revved-up blues progression, and “Shake Shimmy” borders on melodic hardcore.

The single “Choker” shows the band – and the Walker/Charreaux vocal chemistry – at its most melodic, even as the lyrics warn “trust nobody, not even me”. There's also “Judy Holliday” sounding like an art-damaged Pretenders tune, “What Is Wrong With Me” which puts a new spin on the X template, the near-Stonesy future single “Fancy Boots”, and Tracy's full-throated declarations on “No” bringing to mind Sleater-Kinney at their fiercest. The band's sonic signature unites all of these diversions, sandwiched between the primal throb of the opening “Fallout” and the punk cabaret of the closing cover “I'm Tired” (the video must be seen to be believed). The lyrical landscape, mostly envisioned by Tracy and Jeff separately and together, is nothing short of fascinating, living up to that promise of private mythologies – fans will find themselves either puzzling out the seemingly coded connections, or simply giving themselves over to the gleeful wordplay on offer.

A generous selection of bonus tracks rounds out the package, featuring covers of tunes by key influences The Soft Boys and The Only Ones, alternate mixes of the singles, and a few surprises it wouldn't do to spoil. The new record is at once a summation of the musical cosmos-unto-itself that is WALKER BRIGADE for those who've been watching and waiting all along, and a brilliant introduction for the world at large. Despite its title, IF ONLY is anything but tentative... it's a statement as brash as they come, and the time has come for WALKER BRIGADE to be heard far and wide.