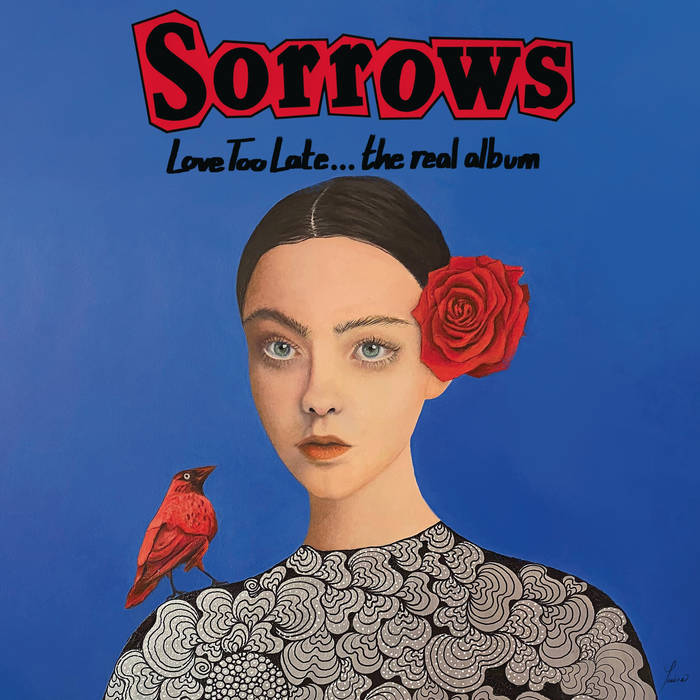 BIG STIR RECORDS is thrilled and honored to announce an all-new album from SORROWS, true legends of the power pop scene. LOVE TOO LATE... the real album sees release August 13 on all platforms, with LPs in black and red vinyl editions, and on CD. It's available for pre-order and pre-save now at www.bigstirrecords.com/sorrows and everywhere. Far from a reissue of the band's 1981 release Love Too Late, the real album is just what it claims: the record the band intended to make, finally reaching your ears, turntables, and the airwaves after forty years... but never too late.

In the late '70s and early '80s, SORROWS – sprung from the seeds of the equally beloved POPPEES – cut a swath across the New York rock scene on stages like CBGB and Max's Kansas City with a thrilling stage presence and a unique sound: three lead singers, a twin-guitar attack, and immediately unforgettable, hook-propelled tunes. By '81 they had had their rapturously-received debut album TEENAGE HEARTBREAK under their belts and a clutch of world class, stage-tested songs at the ready for the followup album. With the post-punk era opening the airwaves to guitar-fueled pop rock acts like The Cars, The Romantics and The Plimsouls, it seemed that SORROWS' time had come.

What happened instead is down to a familiar story encapsulated by two little words: “label interference”. The followup album, Love Too Late, wasn't the record Sorrows wanted to make, and it wasn't the record Sorrows fans wanted to hear. In fact, it's barely Sorrows on the original album at all, with the players and singers summarily replaced in the studio in a misguided bid at commercial success, with only the songs surviving intact. The band weren't having any of it and went back to playing the tunes as they were meant to be played, the label wasn't able to sell the results to anyone expecting the true successor to Teenage Heartbreak, and to all intents the story might have ended there, with the original album never receiving a CD release and the band going their separate ways shortly thereafter.
After four decades and a protracted legal battle, original SORROWS members ARTHUR ALEXANDER (vocals, guitar), JOEY COLA (vocals, guitar) and RICKY STREET (vocals, bass), joined by next generation powerhouse drummer LUIS HERRERA bring you LOVE TOO LATE... the real album. It is, as Arthur says in the sleeve notes, “real Sorrows, playing real Sorrows music, as only Sorrows can”, and those who were there to hear these songs performed live in the band's heyday will attest that The Real Album is the real deal indeed.

And what songs they are, now finally realized as intended with all the vintage SORROWS passion and chemistry on full display: a sterling set of pitch-perfect pop that makes it clear why the track list for Love Too Late was worth revisiting in full. From the opening “Christabelle”, now as then the lead single, and the ringingly euphoric title track, the mix of chiming and churning guitars with finely-honed harmonies and driving drums pull the listener right into the grooves of the power pop classic this album always should have been. And there's more: “Crying Time,” a beautiful souvenir of the influence reggae and dub wielded over the postpunk scene, the pristine should've-been-hit “Rita,” the driving and self-prophetic “Play This Song (On The Radio)” with its sly lyrics more apt now than ever.

Unforgettable choruses abound on “So Much Love”, the beautiful ballad “Breaking My Heart (Over You)” and the galloping “What I Used To Know”. This is strong stuff, with such a heady mix of energy and songcraft that the cover of The Kinks' “Tired Of Waiting For You” doesn't sound out of place in the least. And by the time the record closes with a one-two punch of the wistful “It's Not Love Anymore” and the kick-your-teeth-in roar of “Street Punk Blues”, pop rock fanatics will be ready to flip the platter right back over and start making up for years of missing out on hearing these tunes in their definitive, and this time genuine versions.

While the music speaks for itself, the decades-long journey of Love Too Late... the real album is a story of its own and the subject of a documentary, featuring interviews with Arthur Alexander and Joey Cola, that will accompany the release. There'll be a series of singles commencing with “Christabelle,” and fans can anticipate Alexander making the interview rounds and telling it like it is. With the highly anticipated arrival of Love Too Late... the real album , it's time to set the record straight, and what a record it is. SORROWS are back, just in time… and not a moment too late!

Mixed and Mastered by Barry Wood @ The Other Room, Burbank, CA