This Is Dolph Chaney 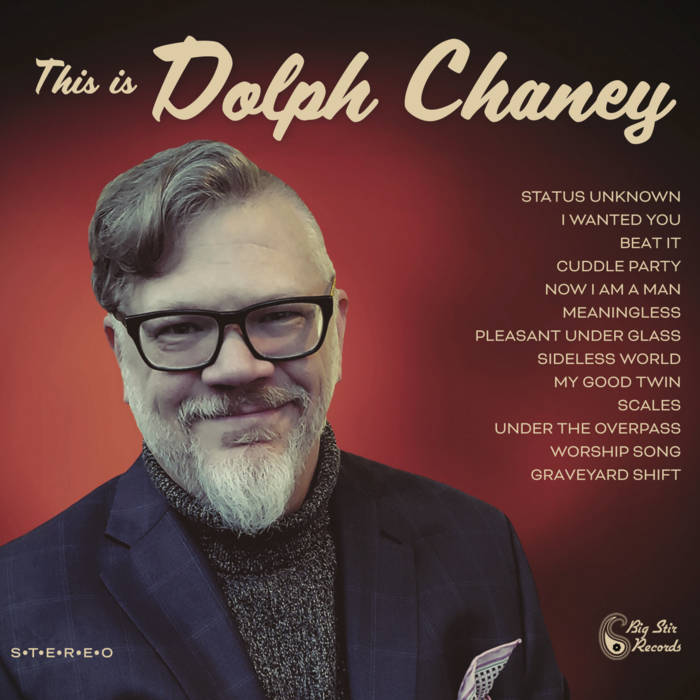 Matthew Flores Beautifully produced and mixed by Nick Bertling (Bertling Noise Laboratories), this is a fantastical power-pop, guitar-laden album of reworkings and new versions of past songs revisited that were written and performed by Dolph, long before he signed on to the Big Stir Records label. Clever lyrics with a down-to-Earth mentality and the lead single has backing vocals by Lindsay Murray of Gretchen's Wheel. Dolph is moving on up from his last album, 2020's "Rebuilding Permit". Great stuff! Favorite track: Now I Am A Man.

Big Stir Records is proud to present the continuing adventures of Chicagoland's DOLPH CHANEY with the February 20 release of THIS IS DOLPH CHANEY, the all-new followup to last year's watershed REBUILDING PERMIT. Featuring 13 tracks produced by NICK BERTLING, the album is available for pre-order on CD and digital formats at www.bigstirrecords.com/store and everywhere now. As intimated by the title, it's at once a career summation, an introduction, and an artistic leap forward for Chaney, hot on the heels of the many honors and breakthroughs of 2020 which culminated in his coronation as WOODY RADIO's Artist Of The Year.

Dolph made unprecedented new friends and fans with his first label release in 2020, but the singer-guitarist has been writing and recording for decades, dating back to his teens in the late ‘80s. Throughout that career, Dolph worked in isolation with lo-fi gear and playing every instrument, aiming to capture his songs quickly and intuitively, then move to the next. It's an approach that reached its peak in terms of both artistry and audience reach on REBUILDING PERMIT, an album that changed everything for Chaney... and just happened to materialize in April 0f last year, when the nascent COVID-19 pandemic changed everything for everyone.

It came as no surprise to those who have known him as long as we have that Dolph proved to be that rare artist suited to thrive and grow in adversity. As that singular moment of cultural uncertainty began to mutate into one sociopolitical nightmare after another, Chaney too evolved, and his response was nothing short of inspirational. With his album earning admirers, airplay, and strong reviews worldwide, Dolph took an invitation from online radio station Woody Radio to perform regular live webcasts and ran with it. The shows brought Dolph more than just new listeners and a much-needed opportunity to interact. “I had the chance to push myself, to try things with my guitar and voice I hadn’t thought I could pull off,” he says. “I was blessed to have all of that keeping me engaged and sharp at such a bewildering time.”

The impetus to keep the shows fresh saw Chaney delving into his own deep back catalog as he caught the ears of other leading lights on the global pop rock scene. Enter NICK BERTLING, also a veteran of homemade music-making, celebrated for his creative work as bertling noise laboratories and helming much-loved records from GRETCHEN'S WHEEL among others. Dolph reached out to simply to express admiration for Nick's work on the just-released Futureman Records XTC tribute. By July 4, after trading tracks, shared admiration and feedback, Nick proposed working together. Things moved quickly, and mere months later, THIS IS DOLPH CHANEY is the dazzling and thoroughly engrossing result, equal parts deeply considered craft and inspired immediacy.

The title reflects the game plan that organically drove the collaboration: an album featuring new arrangements of what had been solo lo-fi songs from Chaney's back catalog that begged for something more. Bertling introduces a clear, direct approach to the sound and the definitive new beginning it represents. It's the first time Chaney has handed over the producer's reins, and a true collaboration, with Bertling sifting through a 50-song pool of candidates to workshop with Dolph. On the final record, songs written between 1991 and 2008, sourced from the Dolph's albums RIPPLES, INFINITY DOGS, HUMBUG GLORY, CLIMBING MOUNTAIN TIME, and GUMSHOE KOALA, all receive empathetic reworkings – some drastic, some subtle, all emblematic of the “next level” production mastery that Bertling brings to the table, with the needs of the tunes front and center.

THIS IS DOLPH CHANEY features key vocal contributions from Kevin & Scott Robertson (The Vapour Trails) on the late-Mersey swing of "Pleasant Under Glass", and Lindsay Murray (of Gretchen's Wheel, who also handles the art design) on the irresistibly rocking first single "Now I Am A Man". But at its core it's Dolph and Nick, who found their perspectives and skills to complement each other astonishingly well. It's a natural next step from REBUILDING PERMIT, where bringing sympathetic partners into the fold multiplied the effectiveness of the results.

The album is, in a word, expansive. Pandemic-era recording being what it is, Bertling and Chaney go home and go big at the same time, and the sound they conjure leaves the bedroom behind for a greater wide open. And it's all different kinds of huge, encompassing Cars-worthy pop (“Cuddle Party”), Bob Mould-tinged rock (“Scales”), and the inexorably building and harrowing arena massiveness of “Meaningless”. There are the evocative Lanois-like soundscapes bookending the record – the opening “Status Unknown” and gently insistent closer “Graveyard Shift” -- and the lushly propulsive college rock heights of “Worship Song” with its sly and striking refrain “Jesus, I'm a dumbass, please forgive me” (and the even more arresting response to the plea). At the forefront, always, is Chaney's voice, bringing newfound control and urgency to the swooping melodies he's crafted over the decades. Everything old is very much new again on TIDC.

“As often as not, the new arrangements on the record were initiated by Nick, and frequently they were complete (pleasant!) surprises to me,” Dolph reveals. Witness the transformation of “Under The Overpass” from a winsomely strummy acoustic number written in 1991 into a lush, seductive groove suggesting Seal or Sade, albeit still sung with Dolph’s signature vulnerability. Conversely, Dolph gives Nick credit for stoking the dormant rock energy in “I Wanted You” and “My Good Twin,” two previously mopey 2008 standouts that benefit greatly from the aural caffeination that makes their hooks simply pop.

The broadening of the production pallet and the tightening of the performances only bring everything that was visceral, heartbreaking, and wonderfully playful about DOLPH CHANEY into clearer focus. Building on a tremendous first year with Big Stir Records, with regular FM and online airplay as well as glowing press responses, he's ready to show rock listeners everywhere what all THIS IS about. On February 20, find out why THIS IS DOLPH CHANEY, and find a new favorite song.